Pagoda is not only a place of religious activities of Vietnamese belief, but also it represents both cultural history and hidden architecture deep inside. Vietnamese pagoda architecture keeps a harmony with natural beauties, ancient structures, and a rich system of sculptures. A long time ago, beside the main function of educating people to be better, taking away the bad, the pagoda also expressed the Vietnamese’s desire to close a gap between hard lives on earth and a better life in the Buddha’s world. From ancient times, pagodas have been a vital part and have had a huge impaction to Vietnamese lives. Therefore, pagodas appear everywhere from small villages to large cities. Some famous pagodas, as below, will show over view regarding Vietnamese culture: 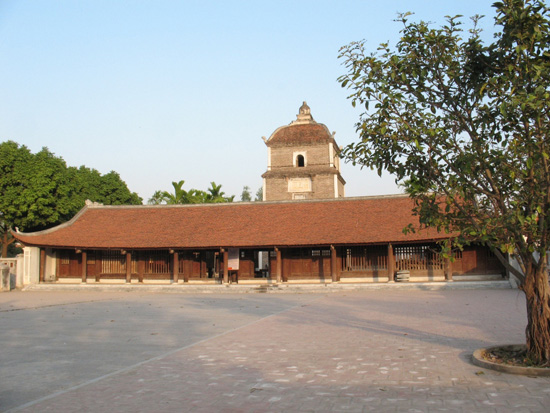 Dau Pagoda is one of the oldest temples in Vietnam, where the first India’s monks went when they came to Vietnam to spread of Buddhism. It is located in Thuan Thanh District, Bac Ninh Province on “Dau” land, “Luy Lau” ancient citadel. The place was famous as the land of four pagodas to worship four natural phenomena including “Phap Van” (cloud), “Phap Vu” (rain), “Phap Loi” (thunder) and “Phap Dien” (lightning). “Dau” pagoda worships “Phap Van” , but the temple to worship “ Phap Vu” was destroyed by war and the sculpture was moved into “Dau” pagoda. Today, we can see two sculptures in there. In addition, the pagoda is also famous for wood architectures of “Hoa Phong” tower and many additional statues. 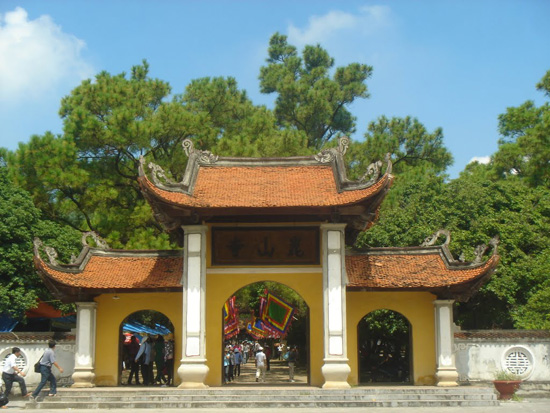 Located on “Co Son” Mountain, Chi Linh Commune, Hai Duong Province, “Con Son” pagoda is also called “Hun” pagoda. It was built in the 13th century and was repaired several times in the 17th , 18th century. The pagoda is famous for a large  group of Buddha sculptures with 385 statues of different sizes. From the Tran Dynasty, the pagoda was a place of Huyen Quang monk to cultivate. It is also a part of Con Son – Kiep Bac complex. Along with Yen Tu Pagoda, Quynh Lam Pagoda and Con Son Pagoda is one of three major centers of the Truc Lam Zen, annually attracts many tourists to visit and pray lucky. 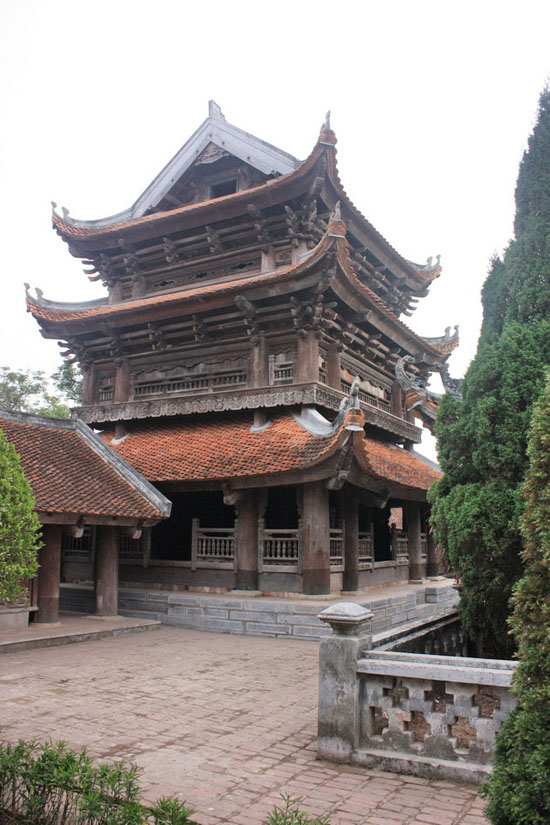 Keo pagoda is located in Vu Thu district, Thai Binh province with a long history of over 400 years old. The temple was built near the Red River in 1061 under the Ly dynasty. It is one of the oldest temples in Vietnam. In 1067, it was renovated several times. Today, it is one of those architecture including 17 buildings. Visiting the pagoda, visitors will see ancient pagoda architecture of Vietnam with carved dragon architecture, flowers on wood in almost structures such as three main gates, bell tower made entirely of wood, water well and worship spaces. The pagoda has nearly 100 statues of Buddhist religious expression Vietnamese belief in general. It also worships Ly Quoc Su, who known one famous monk under the Ly Dynasty and  “the fathers” of bronze casting. 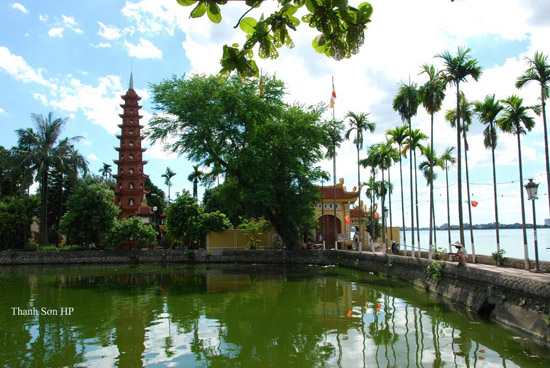 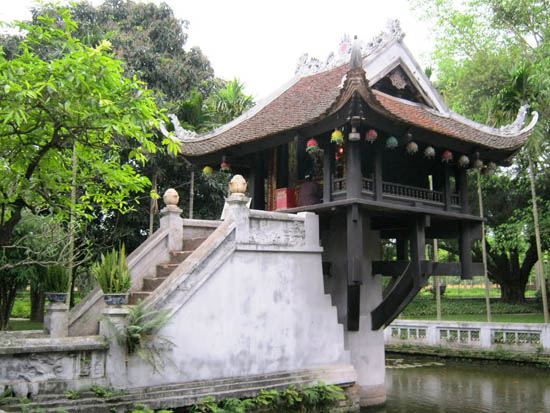 One Pillar Pagoda is situated at no.1 Chua Mot Cot Street, Ba Dinh District. The temple is a part of Ho Chi Minh Complex and become a symbol of a thousand years Hanoi City. King Ly Thai Tong built it in 1049 after his dream. He dreamed that he met bodhisattva Avalokiteshvara seated on a lotus, she lead him to pagoda and gave him a son. Several months later, his queen had a son. For showing his gratitude, he ordered the building of the One Pillar Pagoda in the center of a lotus pond as in his dream. Since then, the temple has become an integral part of cultural beliefs of Hanoians. 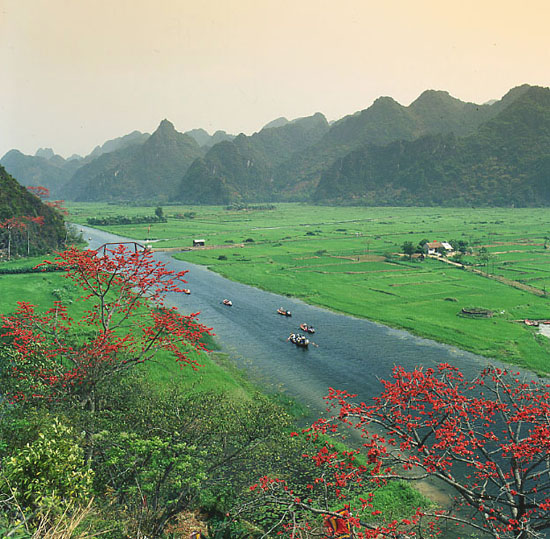 Situated in countryside of Hanoi, about 75 km to the South, Perfume pagoda is not only famous for its the longest festival in Vietnam from January to the end of March in lunar month, but also by natural beauty as well as the sacredness of the largest pagoda complex. The pagoda includes several pagodas along the valley of “Yen” such as “Trinh” temple, “Huong Tich” cave. It is the harmonious natural landscape with typical Buddhist architecture of Vietnam. 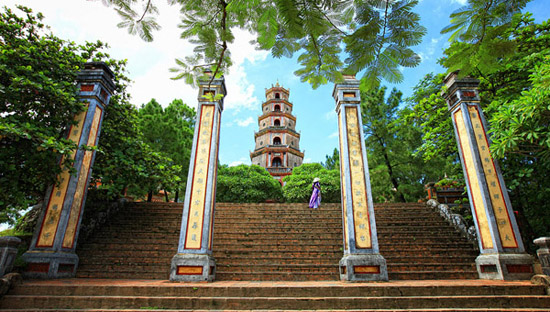 Thien Mu Pagoda is also called Linh Mu Pagoda, it means “heavenly lady” pagoda. It was built on Ha Khe hill, next to the Perfume River and 5km from the city center. By the legend, Nguyen Hoang King saw this land shaped likes a dragon. It is said that having old woman appears every night. She said that a king to come here and built a pagoda to collect good things. After that, the king decided to construct a pagoda like today and named it Thien Mu Pagoda. The pagoda is one of must-see sights in Hue ancient city. 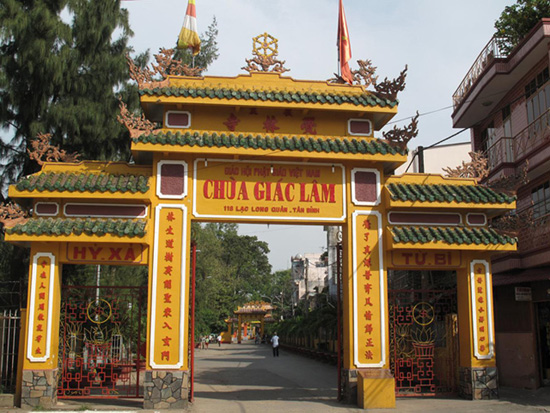 Located in Tan Binh District, Ho Chi Minh City, the pagoda is known as one of the oldest pagoda in Ho Chi Minh City. This is where the founder of Rinzai Zen sect in southern Vietnam. The monk Ly Thuy Long donated money to build the pagoda and named “Son Can” pagoda,(“Son” means mountain, “Ca” means “mound”) under the lord Nguyen Phuc Khoat. It was a shape of “Tam” word including three buildings with typical architecture of Mahayana Buddhism. You may be interested in Ho Chi Minh Tour 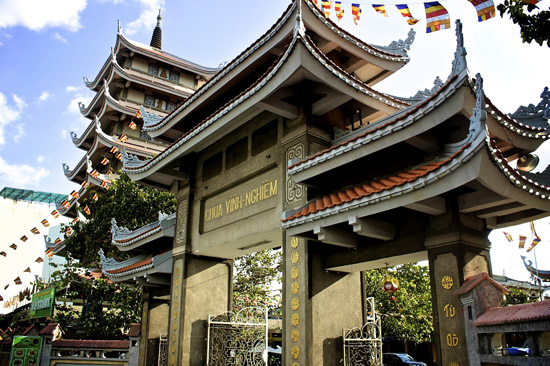 Situated at 339 Nam Ky Khoi Nghia Street, Ward 7, District 3, Ho Chi Minh City. The temple is the harmony between the traditional architectural style of Vietnam and uses modern materials with reinforced concrete. This is the special religious architecture of Vietnam in the 20th century. It is the same pagoda in Bac Giang  and was built by two monks Thich Tam Giac and Thich Thanh Kiem, who came from the northern Vietnam to donate and build the pagoda. The most typical concrete architecture includes a  7-storey tower nearly 40 meters high and many other solidly built with concrete. 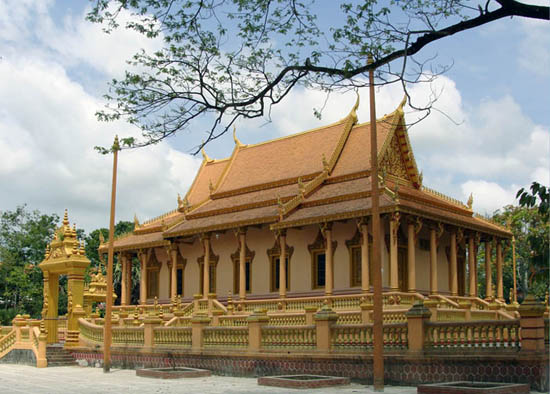 Situated in Soc Trang, the pagoda was built on high ground in wide, open spaces, surrounded by many trees, especially palm trees – plants typical of the Khmers. Under every tree a stone chair for visitors take a rest. It is surrounded by three fences with wide spacing. The entrance is decorated by two big tower with brilliant colors in the Cham architecture style. The pagoda is also a iconic of Champa architecture.

The Exotic Dishes You Should Try When Visiting Siem Reap – Cambodia