Steam rice rolls have some variations with egg, meat, shrimp, chicken, beef, squid filling, which create plenty of dishes with unique flavor from three regions to attract many tourists. It is also a familiar dish of Vietnamese people from children to the elder. Traveling through Vietnam, exploring Vietnam cuisine, you should taste 5 delectable steam rice rolls as below:

It is one of the most popular breakfasts in Cao Ngan, Thai Nguyen. Unlike traditional roll, it includes 2 to 3 thin rolls, one egg, fried pork. Instead of a small bowl of fish sauce, it serves with a bowl of soup, fried onion and a bit of herb. 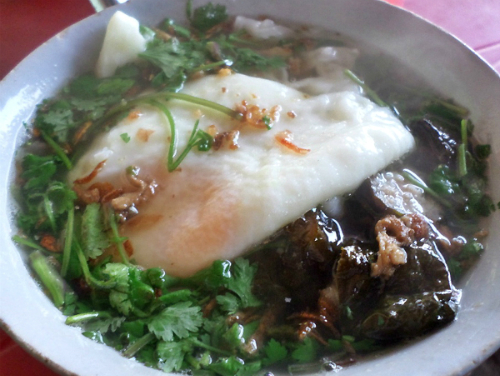 Instead of pork filling, the steam rice rolls is variation of chicken filling. The new filling attracts many gourmets to taste and a lot of stores become the top famous steam rice rolls in Hanoi. The rolls are thin, sort, smooth and sweet. When you service, you should sprinkle fried onions and shrimp to attract your eye. 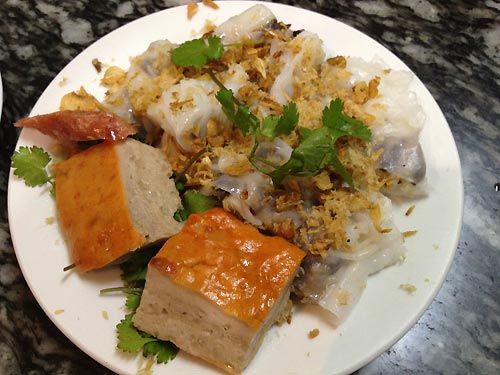 Halong in particular and Quang Ninh in general are available to have fresh seafood. As result, people in Halong create a new filling – it uses squid from Halong seafood and serves with “cha muc”. It attracts people by delicious taste of squid, sweet shrimp and paprika in “Dong Trieu”. 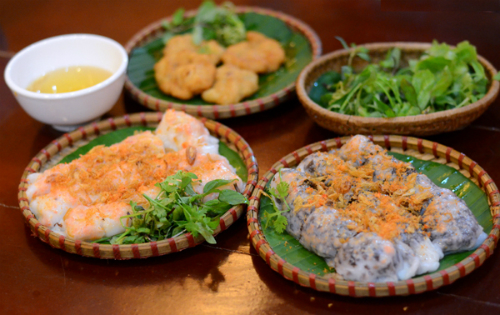 The shrimp steam rice rolls in Thanh Hoa
The shrimp steam rice rolls in Thanh Hoa is not picky as other, it is easier. It just includes crust soft, smooth, chewy, aromatic flavor and has a little shrimp inside. It is so delectable that many people remember the taste, although they just try it the first time. Thanh Hoa’s residents eat this dish as a breakfast. You can try to taste it’s everywhere and near Sam Son beach. Serving the dish of food with fish sauce and grill pork, it will attract not only people in Thanh Hoa, it also touch your mind many tourists. 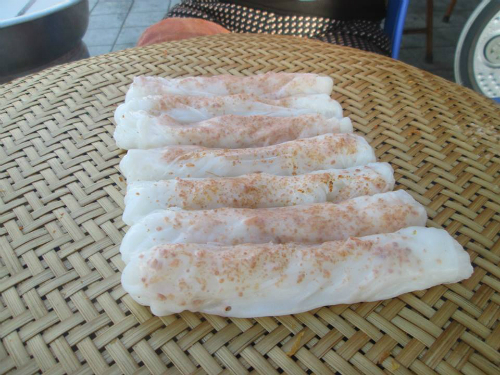 If you come to Y Thien “cha bo” steam rice rolls in 10 district, you will experience a unique dish, it serves with “cha bo” – a specialty of Quang Nam Province. It is an interesting combination between rolls and “cha bo”. As result, the store is always full of customers and attracts many tourists to enjoy. The dish is diversity of “cha que”, “cha chien”, “nem chua”, shrimp cake and make you hardly avoid.